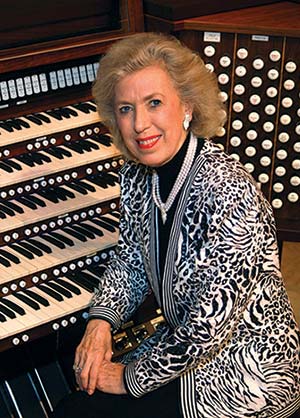 Diane Bish is the most visible and influential classical organist performing today. Concert and recording artist, composer, conductor, and international television personality, Diane Bish displays her dazzling virtuosity and unique showmanship the world over to international acclaim. Her organ performances are hailed as “stunning, virtuoso, fiery, and astonishing.”

Miss Bish’s unparalleled achievements as a young performer gave her the credibility and determination to launch The Joy of Music international television series in 1982 as a platform for awareness and appreciation of “the king of instruments.” Broadcast to over 300 million people around the world each week, The Joy of Music combines exhilarating organ and ensemble performances with an informative, inspirational narrative and exciting world travel. The Joy of Music catalog boasts over 500 episodes featuring famous cathedrals, concert halls, churches and organs. This tremendous outreach to the general public on behalf of the organ and Diane Bish’s longevity as a leading recitalist distinguish her in the world of music.

In 2016, Miss Bish received the inaugural Distinguished Career Award from the New York City Chapter of the American Guild of Organists “for exemplary service to the organ, choral music, and related fields.” That same year, she was named one of Celebrating Women International of Nassau, Bahamas’ Women of Distinction, a title given to women who have made significant, worldwide contributions in the arts, human rights, business, sports, and other important fields. In 1989, Miss Bish was awarded the National Citation by the National Federation of Music Clubs of America. Considered to be the Federation’s highest honor, Diane Bish shares this rare distinction with other luminaries including Leonard Bernstein, Eugene Ormandy, Van Cliburn, Robert Shaw, Irving Berlin, and Fred Waring in receiving this award “for distinguished service to the musical, artistic, and cultural life of the nation.”

A consummate church musician, Diane Bish served as senior organist and artist-in-residence at the Coral Ridge Presbyterian Church in Fort Lauderdale, Florida, for over 20 years. While at Coral Ridge Church, she led the design of the 117-rank Ruffatti organ, recognized as one of the great organs in America. She was instrumental in developing one of the country’s first church concert series and creating an annual church music workshop for musicians around the world. In 2016, she was honored with the title of Organist Emeritus.

Miss Bish has recorded on the foremost organs of the world and was the first American woman to record on the four organs of Freiburg Cathedral, Germany. Featured on over 30 of her recordings are music for organ and orchestra, brass and organ, great organ masterpieces, organ and harp, original works, and hymn arrangements. The sparkling creativity and artistry of Diane Bish are equally evident in her compositions. She has composed numerous solo pieces, arrangements, and full symphonic works that have received much acclaim and are performed regularly due to her ability to combine musical quality with accessibility.

Diane Bish began her study with Dorothy Addy in Wichita, Kansas, and continued as a student of Mildred Andrews at the University of Oklahoma. She was a recipient of Fulbright and French government grants for study in Amsterdam and Paris with Nadia Boulanger, Gustav Leonhardt and Marie Claire Alain. Diane Bish: First Lady of the Organ by Warren Woodruff was published in 1993. Diane Bish is represented worldwide by JEJ Artists.