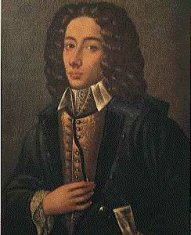 Giovanni Battista Pergolesi was an Italian composer, violinist and organist. He studied music there under a local musician, Francesco Santini, before going to Naples in 1725, where he studied under Gaetano Greco and Francesco Feo among others. He spent most of his brief life working for aristocratic patrons like the principe di Stigliano and the duca di Maddaloni.

Giovanni Battista Pergolesi was one of the most important early composers of opera buffa (comic opera). His opera seria Il prigioner superbo contained the two act buffa intermezzo, La Serva Padrona (The Servant Mistress, August 28, 1733), which became a very popular work in its own right. When it was performed in Paris in 1752, it prompted the so-called Querelle des Bouffons (“quarrel of the comedians”) between supporters of serious French opera by the likes of Jean-Baptiste Lully and Jean-Philippe Rameau and supporters of new Italian comic opera. Pergolesi was held up as a model of the Italian style during this quarrel, which divided Paris’s musical community for two years. Among his other operatic works are his first opera La conversione e morte di San Guglielmo (1731), Lo frate ‘nnammorato (The brother in love, 1732, to a Neapolitan text), L’Olimpiade (January 31, 1735) and Il Flaminio (1735). All his operas were premiered in Naples apart from L’Olimpiade which was first given in Rome.

Giovanni Battista Pergolesi also wrote sacred music, including a Mass in F. It is his Stabat Mater (1735), however, for male soprano, male alto and orchestra, which is his best known sacred work. It was commissioned by the Confraternità dei Cavalieri di San Luigi di Palazzo (the monks of the brotherhood of San Luigi di Palazzo) as a replacement for the rather old-fashioned one by Alessandro Scarlatti for identical forces which had been performed each Good Friday in Naples. Whilst classical in scope, the opening section of the setting demonstrates Pergolesi’s mastery of the Italian baroque ‘durezze e ligature’ style, characterized by numerous suspensions over a faster, conjunct bassline. The work remained popular, becoming the most frequently printed work of the 18th century, and being arranged by a number of other composers, including J.S. Bach, who used it as the basis for his psalm Tilge, Höchster, meine Sünden, BWV 1083.

Giovanni Battista Pergolesi wrote a number of secular instrumental works, including a violin sonata and a violin concerto. A considerable number of instrumental and sacred works once attributed to Pergolesi have since been shown to be falsely attributed. Much of Igor Stravinsky’s ballet, Pulcinella, which ostensibly reworks pieces by Pergolesi, is actually based on spurious works. The Concerti Armonici are now known to be composed by Unico Wilhelm van Wassenaer. Many colorful anecdotes related by his early biographer Florimo, were later revealed as fabrication, though they furnished material for two 19th-century operas broadly based on Pergolesi’s career.

Pergolesi died at the age of twenty-six in Pozzuoli from tuberculosis.