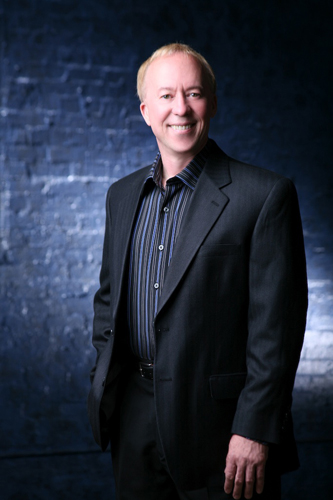 As a beginning piano student of ten years of age, Mark Hayes had little idea of the foundation he was laying for his future career in music. From those inauspicious beginnings in northern Illinois, his career has blossomed into international tours to Europe, the Far East, Australia, New Zealand, Singapore, and Brazil. Now an internationally known writer, his music can be found in the music libraries of the finest churches and universities in the country, and he is in increasing demand for choral clinics and concerts.

Today Hayes’ vocal and instrumental writing is widely acclaimed and performed across the nation. He is well-known for his unique choral settings which draw from such diverse styles such as gospel, jazz, pop, folk, and classical to achieve a truly “American sound.” The popularity of his music is evident in the numerous offers of commissions he receives from universities and churches throughout the country.

Mark first conducted his Te Deum and Magnificat at Carnegie Hall in New York in May 2007, with additional performances in 2008 & 2009. Hayes conducted the Community and Church Honor Choir at 2008 MCDA Convention and led the Community and Church Honor Choir at the SWACDA Regional Convention in 2010 featuring his Gloria. Mark will be conducting the world premiere of his new work for chorus and orchestra, “The American Spirit” at Lincoln Center in May 2011.

His personal catalog, compiled over the last 32 years, includes well over 700 published original compositions and arrangements, which are distributed by several leading publishers. Hayes has produced and arranged over 50 recordings for various artists and publishers, 50 keyboard folios, and 21 vocal solo collections. His first CD of original vocal songs, “All Is Well”, was released June 2010 by Omnis Bene Media Company.

“Empowering church musicians has always been one of my goals”, says Hayes. He lives this out by regularly serving as a clinician at arranging, orchestration, and piano improvisation workshops throughout the country. Because of his creative arranging approach, his performance expertise, and his “hands on” experience as a church pianist for so many years, Hayes is able to give fresh insights into improvisation, accompanying, and congregational hymn playing for the church musician. He is also a co-creator of a multi-level piano method series designed for young church pianists. To further educate and encourage new arrangers and composers, he has served as an adjunct composition instructor at Midwestern Baptist Theological Seminary in Kansas City, Missouri from 1991-1993.

Hayes often incorporates a piano concert featuring his own arrangements into a weekend choir clinic. His warm, sensitive style at the keyboard and behind the conductor’s podium makes him an instant favorite among all age groups.

In addition to his involvement in the sacred and secular choral music fields, Hayes is increasingly sought after as an orchestrator and record producer. Mark Hayes is a recurring recipient of the Standard Award from ASCAP, and his album, I’ve Just Seen Jesus,” received the Dove Award, the equivalent to a Grammy in gospel music. He received the Award for Exemplary Leadership in Christian Music from Baylor University Center for Christian Music Studies.