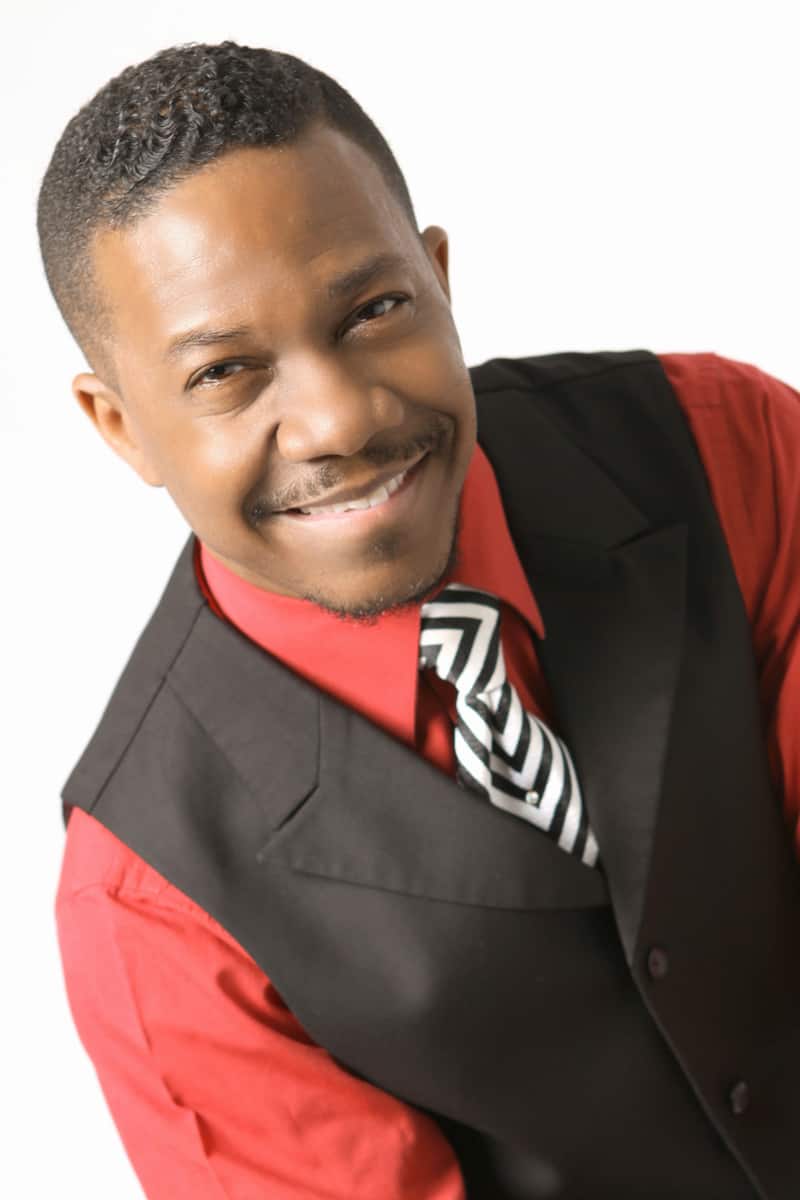 Rev. Raymond Wise, Ph. D., a native of Baltimore, Md., is the son of C. Dexter Wise Jr. and Rev. Julia Virginia Wise. He began his musical career at the age of three, singing gospel music with his family singing group “The Wise Singers.” Rev. Wise was educated through the Baltimore City Public School System and graduated second out of a class of 500 from the Paul Laurence Dunbar Community High School in 1979.

He then went on to Denison University (Granville, Ohio) where he reorganized the Black Student Union Choir, started the Black Student Union Ensemble and Dance company, and earned a B.F.A. in Music. From there he went on to study Opera, Art, and German at the Institute for European Studies in Vienna, Austria, then on to study African-American History, Music, and Dance at San Francisco State University in San Francisco, California. He completed an apprenticeship in the business and recording of Gospel Music with the Walter Hawkins Corporation in Oakland, California. Rev. Wise was awarded a Graduate Fellowship from The Ohio State University in Columbus, Ohio where he earned his Masters in Music Education and Ohio Teacher’s Certification. He also completed a Doctorate in Music Education at the Ohio State University for which his dissertation topic is “Defining African American Gospel Music by Tracing its Historical and Musical Development from 1900 to 2000.”

Rev. Wise began his acting career at the age of 9 when he played the role of Benjamin in a regional theater production of ‘The Me Nobody Knows”. He sang the role of Amahl in Menotti’s “Amahl and the Night Visitors.” As a teen, he served as a chorus member and soloist for the Baltimore Opera Company’s education outreach program and performed nationally and abroad with the Paul Laurence Dunbar Chamber Singers, under the direction of Hugh Carey. Wise has performed as a countertenor in such works as Handel’s Messiah and in Leslie Burrs’ work entitled “Declaration of Joy” written for gospel chorus, soloist, and orchestra. Wise performed the role of Marcus in the Opera Columbus premiere of Susan Kander’s opera entitled “Somebody’s Children” and performed the solo for several of Copland’s Old American Songs with the Columbus Symphony Orchestra and served as a guest soloist, conductor, and/or composer with the Nashville, Littleton, Akron, Ithaca College, and Czech National Symphonies.

As a composer, Wise has penned more than 670 compositions that have been performed and recorded by local, national, and international recording artists. The works of Dr. Wise are published by numerous national music publishers including, GIA, Hinshaw Music, Hal Leonard, Abingdon Press, MusicSpoke, and the United Methodist Publishing House. His works are also included in hymnals such as “Zion Still Sings,” the “Africana Hymnal” and the “Lead Me Guide Me” Catholic Hymnal. In 2003, Dr. Wise released the Raymond Wise Choral Sheet Music Series, through which more than 200 of his Gospel, Spiritual, and Choral arrangements are available.

Some of his notable works include “Afro-American Suite” written for Bass-Baritone and Chorus. Wise co-wrote the script for “God What Color Is Trouble” with director Ron Pitts and has written the music for more than 20 original musical theater productions, including Dwight Collin’s “Dark Symphony,” the Samuel S. Davis production of “The Snow Queen,” and the Amera-flora production of “Listen With Your Heart.” Wise composed the musical score for the children’s opera “Barefoot.” Barefoot, originally composed to be performed by Opera Columbus’ educational outreach program has also been performed by The Children’s Theater Company of Winston-Salem and Winston-Salem State University in which Dr. Maya Angelou performed the role of narrator.

In 2004 Wise released an anthology of Spirituals entitled 21 Spirituals for the 21st Century that features 23 of his concert spiritual arrangements. This anthology has received national and international acclaim. Since releasing the 21 Spiritual’s collection Dr. Wise has received commissions and invitations to compose original works for the Penn State University Spiritual’s Festival and Winterfest, The American Spiritual’s Ensemble, The AME Congress 145th Anniversary Celebration, the International Spiritual’s Festival held in honor of Moses Hogan in Prague, Czech Republic in the summer of 2008, the Springfield Mass Unity Festival, the Trenton Children’s Chorus, the Blooming Songs Children’s music project, and others.

Raymond Wise has studied ballet, jazz, modern, tap, African, ethnic, and experimental dance. He performed on the East Coast with the Baltimore Dance Theater Company, Baltimore, Md. under artistic director Eva Anderson. He also performed on the West Coast with the EMBAJE Dance Ensemble from San Francisco State University under artistic director Dr. Alberta Rose. Since then Wise has taught and instructed dance at The Samuel S. Davis Youth Complex for the Performing Arts and the King Complex for the Visual and Performing Arts both in Columbus, Ohio.

Wise has served as choreographer for many theatrical productions and instructed tap dance and liturgical dance at the Center for the Gospel Arts and for liturgical dance companies across the nation. Wise was recently honored by the City of Columbus for his contribution to dance with a portrait on the Long Street Cultural Wall, a 60-panel display of artists within the Columbus, Ohio area.
Rev. Wise has served as a church musician for more than 40 years. He has appeared on radio and television, recorded 25 albums, performed with opera singers, orchestras, dance companies, and professional recording groups. He has toured extensively throughout the United States, Canada, Europe, and Asia as a singer, pianist, composer, teacher, lecturer, dancer, choreographer, and choral conductor for festivals and honor choirs.

Rev. Wise’s goal is to use his education and experience to establish an accredited “Center For The Gospel Arts” in which “Gospel Music” and the “Gospel Arts” can be elevated, instructed, and promoted. To this end, he founded and is President of Raise Productions (1985), a gospel music production company (Columbus, Ohio).

Raise has also developed performing groups that have performed throughout the United States and Europe, won Gospel Music Excellence Awards, produced musical reviews, plays, concerts, and recorded several albums. Several of the Raise groups are national recording groups who have recorded on both the Raise Record label as well as various national gospel record labels. These groups include Raise Choir, Family, Raise Mass Choir, and the Raise Kids.

Raise established “The Center For The Gospel Arts” in 1989 to provide educational training for gospel artists and the community. He has developed specialized curriculums in the gospel arts and texts for this school, which offers numerous classes per week, and has served over 5000 since its opening. Raise has partnered with various seminaries and colleges throughout Ohio and the United States to develop gospel arts certificate programs.

Dr. Wise developed and implemented courses in African-American Gospel Music, Spirituals, Worship, and Gospel choirs at Denison University (Granville, Ohio), The Ohio State University (Columbus, Ohio), Trinity Lutheran Seminary (Columbus, Ohio), Ashland Theological Seminary (Bethlehem House of Bread Program, Akron, Ohio) and Columbus School for Girls. He served as the Co-Director of the Hampton University Minister’s Conference Choir and Organist Guild Academy that provides intensive training in African American sacred music for college students preparing for service as church music ministers. He also served as the Co-Director and Director of the Hampton University Minister’s Conference Choir and Organist Guild. His knowledge of both the gospel and classical music genre has enabled him to serve as a consultant and clinician in academic and gospel music settings across the nation and abroad. This has enabled him to bridge the musical gap between the gospel and classical worlds.

Of all of the accomplishments and experiences, the most outstanding aspect of Rev. Wise’s life is that he is “saved” (a born-again Christian). Therefore, he has committed also to “Raising the Word of God Higher,” so that lost souls will be led to Christ. And as a result of this commitment, Rev. Wise received and accepted the call to the Gospel Ministry and was licensed by the Shiloh Baptist Church in 1989. Rev. Wise was ordained in 2007 and presently serves as an Associate Minister at Faith Ministries Interdenominational Church, where Dr. C. Dexter Wise III is the pastor. Dr. Wise is married to Dawnne Wise and has one son, Ryan Wise.

So, you see Rev. Raymond Wise in not merely a man with many talents, or a Musician with many accomplishments, or even a Man of great vision, but also an anointed Minister of the gospel. So as he comes forth to minister, his prayer and our prayer is that you will be blessed by his ministry.